Beautiful Baotu Spring Park is located in the centre of Jinan City, and it is here that you will find the Baotu Spring. In the past, the Baotu Spring only covered 4 mu (about two thirds of an acre). The park itself was originally established in 1956 and more recently has been extended to 158 mu (about 26 acres). This highly valued facility represents the symbol of Jinan City and is regarded as one of the three major places of interest in Jinan. This park is highly regarded as a well known scenic spot which makes an ideal location for admirers of wonderful natural springs, culture and various constructions.More information about China Tour in chinatourguide.com. 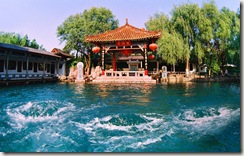 The Baotu Spring is part of a cluster of about 20 named springs. Water age estimates suggest that its water originates from shallow circulation.The spring pool of the Baotu spring is fed by an underwater limestone water through three outlets, the volume of the water coming out of the spring can reach peak values up to 1.6 cubic metres per second. The water jets from the spring are said to have reached highs up to 26 metres.The water temperature remains constant of 18 degree Celsius through the entire year.
The Baotu Spring Park has memorials of Li Kuchan, a master in traditional Chinese Painting, Wang Xuetao and Li Qingzhao. The park also holds performances of Peking Opera all year round. With ten cultural features, including the spring, rocks, opera performances, lanterns, chrysanthemum, calligraphy, paintings and stone tablets, the Baotu Spring Park has become a world famous tour spot, which synthesizes characteristics of both the south and north parks in China and combines the spring, rocks and culture of landscape garden in one park.